The People God Writes About 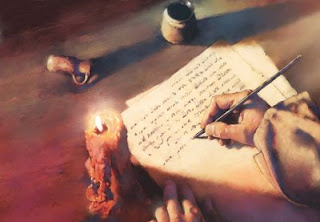 I LOVE roadtrips. If I'm with friends, I love them because it makes for a fun trip. If I'm not, I love them because they are usually very inspirational times for me. I usually take a bunch of sermon cds, some of my favorite Christian cds, and have one very long devotional time with God. On the trip I took this last weekend I listened to a lot of great messages..Bro. Jason Sisco..messages from the Passing the Mantle Conference '08..and a message Bro. Stoddard preached at my church a few years ago. I had already listened to all of these at least once before, but still found myself gleaning something new from each of them. The message Bro. Stoddard preached: "The People God Writes About" is one of the best messages I have ever heard. I wish that every person serving God, who has served God, or has even thought about serving God could hear it.

The passage of scripture he references is Hebrews 11. The minister spoke about how all these men and women of God are not only mentioned in the past in the Bible..but mentioned yet again, for their faith, in what's pretty much a Bible "Hall of Fame". The author of Hebrews goes as far as to say that the world was not worthy of them....

If you are a saint who has fallen, pick yourself up, God still has faith in you.

If you are a saint that is looking down or talking about someone who has fallen, the word "Christian" means Christ-like. Christ wouldn't do this; therefore, if you are acting this way you are not a Christian. Besides, how will God ever be able to use that person as they are meant to me used if the same people who ought to be standing by their side are the ones blocking their way to His Promise?

God didn't write about perfect people. There are no perfect people. That's why there was a Calvary. God wrote about people who had faith in Him and realized that this world was not their home. People, who, when they made a mistake,learned, dusted themselves off, and continued on their journey.

These all died in faith, not having received the promises, but having seen them afar off, and were persuaded of them, and embraced them, and confessed that they were strangers and pilgrims on the earth.For they that say such things declare plainly that they seek a country. And truly, if they had been mindful of that country from whence they came out, they might have had opportunity to have returned. But now they desire a better country, that is, an heavenly: wherefore God is not ashamed to be called their God: for he hath prepared for them a city.