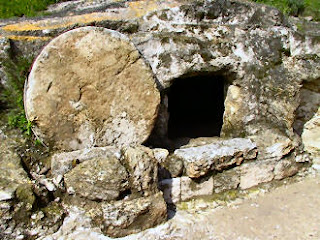 "And it came to pass, as they were much perplexed thereabout, behold, two men stood by them in shining garments: And as they were afraid, and bowed down their faces to the earth, they said unto them, Why seek ye the living among the dead? He is not here, but is risen..." ~Luke 24:4-6

"Jesus died and...and He rose again!!!"  These six words, proclaimed by my 4 1/2 year old nephew to my entire church, were the highlight of my Easter.  Not because it was cute, though it was. Not because I felt chills go through me, though I did. But because of the tears it brought to mine and others' eyes, tears that I don't think we ourselves even understood....yet they came. It wasn't until later that day, that I would fully grasp what exactly had happened in that moment.

So why was my nephew asked to say that, randomly, right at the end of the children's program in the first place?  Because he had been saying it in his classroom, and, lucky for us, his teacher had caught it on video. She asked him to repeat it and tell it to the whole class. "Jesus died and...and He rose again!!!" I type it that way, because that's how he said it each time. "Jesus died" (looking one direction, somewhat calm demeanor, look of sadness) "and"..."and he rose again!!!" (straightened body posture, animatedly looking the other direction, amazed, excited look on his face, with a "you have GOT to get this!" sound in his voice)

Later that day I found out how Easter day had begun at my brother and sister-in-law's house, who are the parents of this nephew and his twin sister. That morning when my sister-in-law woke up, my niece was already standing there, waiting. She asked if it was Easter. My sister-in-law affirmed that. Then my niece said, with sadness in her voice, "Jesus dies today...."  When my sister-in-law told me this my heart almost broke.  Apparently somehow in the midst of bedtime stories, Sunday school classes, Reaching Our Kids classes, one on one Jesus talks, etc., she had apparently not fully understood that Jesus didn't just die (and definitely wasn't about to die), but that He rose from the dead. Having talked to Him everyday, in prayer, she understood the fact that He was alive. So imagine the sorrow in her heart to think that He was going to die! My sister-in-law, of course, reexplained to her the truth about the resurrection.  I'm guessing at some point my nephew was either part of this conversation, or that my niece passed on "The Good News" to him.

So what was it about his proclamation in church that had brought tears to our eyes?  I think it was the sincerity and freshness with which it was spoken.  "Jesus died..and..and He rose again!!!"  Maybe, just maybe, that was his first time to finally understand it...to finally understand that not just a man, but our Savior, the Creator of the universe, came to earth, as a man, to die for us, and rose again....Our Savior LIVES!!!

"O death, where is thy sting? O grave, where is thy victory? The sting of death is sin; and the strength of sin is the law. But thanks be to God, which giveth us the victory through our Lord Jesus Christ." ~1 Corinthians 15:55-57
This brings to mind the lyrics of one of my favorite hymns:

God sent His son, they called Him Jesus
He came to love, heal, and forgive.
He lived and died to buy my pardon,
An empty grave is there to prove my Savior lives.

How sweet to hold a newborn baby,
And feel the pride and joy he gives.
But greater still the calm assurance,
This child can face uncertain days because He lives.

And then one day I'll cross the river,
I'll fight life's final war with pain.
And then as death gives way to victory,
I'll see the lights of glory and I'll know He lives.

Email ThisBlogThis!Share to TwitterShare to FacebookShare to Pinterest
Newer Posts Older Posts Home
Subscribe to: Posts (Atom)
"To every thing there is a season, and a time to every purpose under the heaven:...He hath made everything beautiful in His time..." ~Ecclesiastes 3:1, 11