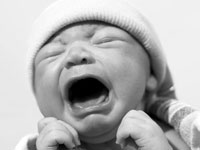 “All I have seen teaches me to trust the Creator for all I have not seen.” ~Ralph Waldo Emerson

I am presently reading a book called “The Devil in Pew Number Seven” by Rebecca Nichols Alonzo.The writer’s very creative narrative of her own birth made quite an impression on me:

My eyes were pinched shut against a light as harsh as a solar flare. They stung as if sprayed with salt water. From head to toe, my skin tingled as if a blast of arctic air had swept over me. Chilled to the bone, I couldn’t explain the traumatic change in the temperature. My body shivered, trembling like a leaf in the wind.  And, although I was suddenly cold, my lungs burned with each breath.
In vain, I cried out.

My legs, kicking without regard for the hands that attempted to hold me down, were no match for the masked faces surrounding me. I could not make sense of their muffled voices. Out of control, powerless to hold my head up, I was carried away against my will. With fingers curled into a ball of fury, face as red as Mars, I howled so loudly the wail could be heard down the hall.

Like all humanity before me, I entered the world staging a protest.

My first thought when I read this was “..and so it is with us.”  How many times in life does our flesh protest something God wants us to do or perhaps just something he wills us to endure?  How many times does He move us forward, while our heels are still dug in the sand?  How many times has He asked us simply to remain standing, yet we proclaim a sit in and recruit friends to join us.

A baby’s options are death or life, nothing else, and so it is with us. Stagnation is a spiritual killer, as is letting down your guard, forgetting or neglecting to keep your spiritual armor on. Recently, while driving through the state of Missouri, I read alarming statistics posted on an illuminated sign beside the interstate: “Number of Deaths this Year: 711; 64% Unbuckled”.  I personally have been in at least one accident, in which I have no doubt that I would have died, had I not been wearing a seat belt. Instead, due to this precaution, and, no doubt, greatly due to God’s protection, I walked out of the car, practically unscathed. At 70 mph, the car had rolled multiple times and finally landed upside down, with a caved in roof.  When I read that sign reporting the number of deaths I just kept thinking, how low would that first number have  been, had, by chance, that second number been lower? And how much is this like us in the spiritual realm? How many casualties could be prevented if we simply remembered to keep our spiritual armor on at all times? (Ephesians 6:10-18)

Whether God has told you to move or whether He’s told you to stand. Don’t doubt. Don’t question. If He has spoken, you can rest assured that the path you will trod will be the safest. Why?  Because He has promised to be with you.

As the song goes…
“Many things about tomorrow
I don’t seem to understand,
But I know who holds tomorrow
And I know He hold my hand.”

So stand up, put down those protest signs, and get those heels out of the sand. God is FOR you. (Psalm 56:9)

For I know the thoughts that I think toward you, says the Lord, thoughts of peace and not of evil, to give you a future and a hope. ~Jeremiah 29:11

Posted by Pilgrim at 7:46 PM No comments:

Email ThisBlogThis!Share to TwitterShare to FacebookShare to Pinterest
Labels: Commitment, Destiny, Hope, Peace, Persistence, Submission, The Call
Newer Posts Older Posts Home
Subscribe to: Posts (Atom)
"To every thing there is a season, and a time to every purpose under the heaven:...He hath made everything beautiful in His time..." ~Ecclesiastes 3:1, 11