Faith Needs No Back Up Plan 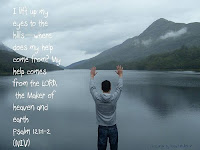 This morning in prayer I was talking to God about some of the specific promises He has given me. Recently I had been struggling with the "walking by faith, not by sight" aspect of believing and standing on God's promises, so, in prayer, I was asking God to strengthen my faith.

At this time, God brought to my attention a blessing that had came to one of my family members just recently. This family member needed a job very badly, wanted a certain one, had applied for said type of position, and was counting on God to answer her prayer for this job. This job was within the school system, was the one thing in the system she was very qualified to do, and it had the exact schedule she desired. She didn't apply anywhere else...and waited..and prayed...and waited.

In all honesty, this frustrated me. I've always been a "have a back up plan" type of person, and, especially in this kind of situation, felt she should have been putting in applications anywhere she could...and I felt very tempted to say so. However, from some personal experiences of realizing that some of the most sincere people trying to look out for your own good can be the worst faith busters, I withstood saying anything...and just prayed right along with her.

Well...God brought just the right close connection into my family's life just in time for the school year to start. This person was in a position in which he had the authority to hire someone for the type of job my family member desired and she is now working for a different school association than she had even originally applied, her work location is just 1 minute from where she lives, and she has an even better schedule than she originally was hoping for.

God had made his point to me loud and clear that faith needs no back up plan. I have learned that one's closest friends and family members can unknowingly play the devil's advocate. Questions like "what if that doesn't happen?", "what if you don't get that job?", etc. are spoken out of honest concern, not wanting to see the friend or family member stuck staring at a brick wall when all is said and done....

But, one must also understand that FAITH MEANS NO PLAN B. That's right. when God speaks something, no back up plan is needed, only faith. As a matter of fact, I believe, when God has truly spoken, that a back up plan is the enemy to faith.

If God has given you a promise, stand on that promise. Believe Him for that promise. Trust in His Word. Do not fall prey to making a Plan B. I believe "back up plans" insult God's integrity. Ponder what He has spoken, but do not question it, for God's promises are yea and amen. (1 Cor. 1:20)
Posted by Pilgrim at 12:29 PM 2 comments: 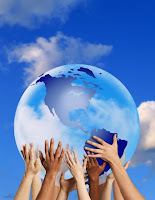 These days it seems like everytime I see or read the news it's nothing but bad news...BUT, today I read something that made me smile. Something that I have felt should have happened a long time ago...the article it came from focused on the negative (as news usually does) of those who haven't taken this pledge yet...but I'm choosing to focus on the positive and only post that part. This is from a Yahoo Finance article online:

The Giving Pledge is the brainchild of billionaire businessmen Bill Gates and Warren Buffett. The two of them have teamed up to ask the world's wealthiest people to donate at least 50% of their fortunes to charities. They believe that the richest people in the world can eradicate many of the world's problems through philanthropy. The pledge is not a binding contract but more of a "moral commitment". Individuals are free to donate money to whatever cause they would like. So, far about 40 billionaires have accepted the giving pledge challenge.

The Giving Pledge
Posted by Pilgrim at 12:25 PM 1 comment:

And they overcame him by the blood of the Lamb, and by the word of their testimony; and they loved not their lives unto the death. ~Revelation 12:11

Over the last month I have had the opportunity to have two wonderful ladies share their testimonies with me.

One had received the Holy Ghost at a young age, but her one parent who served God backslid, so she didn't grow up attending church. Later, in her early adult years, trying to escape extreme heartbreak from a broken dating relationship, she ended up flinging herself into a world of drugs and prostitution, and remained there for many years. While sitting on an airplane, headed back to her home town, by order of a judge, she spoke to God for the first time in a very long time, telling Him she liked her life the way it was, but that she knew He didn't, and if He would take this desire away from her, she would serve him again. At that moment she felt a warm sensation inside...as God took that desire away from her for good.

The other lady who shared her story with me shared the testimony of her father. He had been a man called to the missions field, who decided to run from the call. Eventually he began drinking, and a downward spiral began. He would later end up sexually abusing his daughters. Years later that man sat on the back row of a church building...making his way to the altar spouting words of how unworthy he was of God's mercy. That man not only became reconciled with God, but for more than 30 years he served God faithfully. He was the one, when you would visit his church, that would be shouting and praising God every service. No doubt few people understood, when he worshipped like he did, why he worshipped like he did. Little did they realize how much God had done for him.

While I think his testimony is an awesome example of God's mercy, to me a testimony just as great is her ability to be able and desire to share it with such joy. And, the fact that she told me the story because she was sharing her burden for prison ministry...for reaching out to the murderer, to the child abuser, to all those people whom everyone else thinks is hopeless, or undeserving of hope. To me the greatest testimony is the gift of forgiveness God put in this woman's heart.

I shared both of these just to say God loves you. He loves YOU. Now, if you're not living right, He doesn't love your sin; He hates it, and sin will have no place in Heaven. But he loves YOU very much. Very VERY much. He knows you better than anyone else and loves you more than anyone else. He desires to see you living a life filled with peace in Him. He desires for you to spend eternity with Him in Heaven. Jesus Loves You...This I Know. Will you choose to love Him too?

And, if you've already made this choice, are you loving others like He would & are you sharing your testimony like you should?
Posted by Pilgrim at 6:36 PM No comments:

Email ThisBlogThis!Share to TwitterShare to FacebookShare to Pinterest
Labels: Forgiveness, Love
Newer Posts Older Posts Home
Subscribe to: Posts (Atom)
"To every thing there is a season, and a time to every purpose under the heaven:...He hath made everything beautiful in His time..." ~Ecclesiastes 3:1, 11