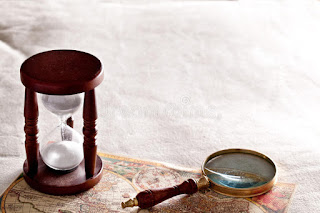 
Reading aloud from Matthew chapter 2 on Christmas morning, I read how King Herod questioned the wise men from the east as to where Christ should be born:

And they said unto him, In Bethlehem of Judaea: for thus it is written by the prophet, And thou Bethlehem, in the land of Juda, art not the least among the princes of Juda: for out of thee shall come a Governor, that shall rule my people Israel. (vs. 5-6)

This was a reference to a prophesy spoken by the prophet Micah hundreds of  years before:


But thou, Bethlehem Ephratah, though thou be little among the thousands of Judah, yet out of thee shall he come forth unto me that is to be ruler in Israel; whose goings forth have been from of old, from everlasting. ~Micah 5:2

I then read how an angel spoke to Joseph in a dream, telling him to take his family and flee to Egypt for their safety. Joseph obeyed. As recorded in vs 14-15:


When he arose, he took the young child and his mother by night, and departed into Egypt: And was there until the death of Herod: that it might be fulfilled which was spoken of the Lord by the prophet, saying, Out of Egypt have I called my son.

This was a reference to a prophesy spoken by the prophet Hosea hundreds of years before:

A little while later, once again, an angel appeared to Joseph in a dream, telling him to return to Israel, that it was now safe to go back. Scriptures expounds:


But when he heard that Archelaus did reign in Judaea in the room of his father Herod, he was afraid to go thither: notwithstanding, being warned of God in a dream, he turned aside into the parts of Galilee: And he came and dwelt in a city called Nazareth: that it might be fulfilled which was spoken by the prophets, He shall be called a Nazarene." (vs. 22-23)

As I read through these scriptures I began to think about how, if someone had only heard the prophesy about the Savior coming from Bethlehem, but only knew Jesus as the guy from Nazareth, or if they only knew of the prophesy of  Him being called out of Egypt, but didn't know that as a baby he had ever lived in Egypt, would they have missed Jesus?  Would they have missed realizing who He was because they were so focused on that one detail and totally have missed the fact that he was love incarnate?  I couldn't help but wonder...would I have missed Jesus?

Many did. John 7:41-43 states that, "Others said, This is the Christ. But some said, Shall Christ come out of Galilee? Hath not the scripture said, That Christ cometh of the seed of David, and out of the town of Bethlehem, where David was? So there was a division among the people because of him."

Right after that conversation the officers, chief priests, and Pharisees began to talk among themselves about Him. Nicodemus stood up for Christ, but the other leaders responded, "...Art thou also of Galilee? Search, and look: for out of Galilee ariseth no prophet." (vs. 52)  Though, according to Matthew, multiple prophets had spoken of the Savior being a Nazarene, this group was all focused on the fact that He would come from Bethlehem. Apparently they had no idea He had been born there.

Even Nathanael would possibly have overlooked Christ, had Philip not been his friend and led him to Him:


In the same way that so many were able to miss Jesus, despite Him walking and talking with them, so we also can miss things in our lives, if we are not careful.  It can be so easy to find ourselves zoned in on one thing, one area of life, etc. and total miss out on the big picture. We have to be careful not to be so focused on the mundane that we miss what's most important. As the saying goes, sometimes we can't see the forest for the trees.

We can be guilty of this in so many ways:

When reading scripture:  It is so important to read scripture in context. Everyone seeking a relationship with Christ needs to read the whole Bible and when studying the Bible they need to read not just a scripture, but everything around the scripture in context. For example, John 3:16 is a wonderful verse, but we can't embrace it, yet ignore verse 3-8.

With relationships:  It can be very easy to get so consumed in the routine day in and day out responsibilities of life, that we can neglect the most important relationships in our life. We can also miss out when we choose to focus on and magnify a few faults in another, rather than choosing to focus on and celebrate their many strengths.

With God given callings:  Sometimes, we can lose the big picture and come to think inside a box that God never created in the first place. God is a very creative God and He doesn't always do things exactly the way we expect. The truth is, He rarely does. We can also be at fault in thinking that only certain gifts and talents are useful within certain positions. Due to this we may cast them aside, when scripture teaches us to use them all. (Matthew 25:14-30)

This list could go on and on, but the point is this: DON'T MISS IT! Don't miss what's most important. Step back. Take a good look at it all. Realize what is most important and focus on those things. These people who lived during the time of Christ were walking, talking, and eating with Jesus, yet many overlooked him because they didn't know his full background; they only knew the part that didn't line up with what they were watching for. Because of this, they missed Jesus.

Email ThisBlogThis!Share to TwitterShare to FacebookShare to Pinterest
Labels: Blessings, Clearing the Clutter, Friendship, Relationships, The Big Picture, The Journey