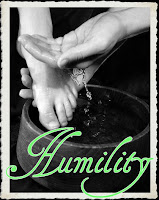 For God hath not given us the spirit of fear; but of power, and of love, and of a sound mind.
~2 Timothy 1:7

He has told you, O man, what is good;and what does the LORD require of you but to do justice, and to love kindness,and to walk humbly with your God? ~Micah 6:8

There are times when you hear a certain sermon or read a certain passage in a book and know instantly that you have been forever changed by those words. This week I read one such passage and would like to share it with you. It is from the book "Passing the Mantle" by Sis. Joy Haney. In this book both her and various other ministers share both their life experiences and advice for the next generation. I strongly encourage you to read it if you get the chance.

This particular passage I would like to share was written by Sis. Bobbye Wendell, a former missionary to Ethiopia. Upon her family arriving in Ethiopia, the first open door God set before them was that of one to minister to lepers. As a matter of fact, there were over 500,000 lepers in that country at the time (in the'70s). They ended up purchasing and repairing a building near where these lepers were living and began to use the building for teaching them various skills and also as a church building. Up until the point at which Sis. Bobbye Wendell wrote this account from her life, they had seen no true harvest yet from their labor. She had a burden for these people, but also lived in fear of this disease. One day, when her husband brought home a lady with leprosy to be there new house keeper, which meant her working around their children, she told him he had to take her away...The following is what ensued from this conversation and how God dealt with her in a life changing way:

"He said he could not; she had no place to go and would be hurt again. She had been beaten terribly by other beggers. I told him very emphatically that she had to go. He sadly looked at me and said, "You may take her...here are the keys...but will you do something for us?" I asked what it was he wanted. He asked if I would go by Calvary on the way taking her back.

I was numbed. Didn't he know that I had been to Calvary? I had been there before, but it had been to take a soul to Calvary not to lead one away. I started to cry. I took the keys and grabbed my prayer shawl. It was a nice little pink and green shawl made by someone in the Alexandria, Louisiana church as a gift for me on the mission field. I cannot remember the dear one who gave it to me. I used it every service in the chapel church. There were reasons I used it.

I flew out of the house but did not take the lady with me. It was time for something to happen for me. Today would be the day.

The drive to the workshop and chapel was not very far; it consisted of a road, winding down the mountains side and through the village market. The narrow road was crowded with people who seemed to have nothing to do. Every time we drove down without incident was either a tribute to our driving skills or a miracle. This day was no exception, and I arrived safely at the workshop.

It was Saturday. We did not have a Saturday service at this time. Only the guard, Wolde Gabriel, was there. He opened the gate to the property, and I drove in. Wolde had very little of his nose left on his face. His eyes looked sad and a bit wary. He would wonder what I was doing there today. I drove past him to the front door of the building. I exited the car and went into the building. It was the same as the day before, nothing changed. The sameness was the smell.

When you have over one hundred people with various degrees of infection eating away at them...hands, feet, faces, and bodies...there is a cloying, clinging odor that permeates the area. This smell never went away. Soap, disinfectant, and cleaners just added to the strength and tenacity of the smell. A smell of dying flesh, people whose desperate claim to life was: "God made me this way to test the rich man. If he gives me a coin he escapes hell and I will have bread for the day." Do you blame them? They were told they had no soul, they could never inherit heaven, and they were never allowed into the vast compounds of the existing State church.....

I went deeper into the building. The guard, Wolde, remained at the door. His hands, or what remained of them, were held behind his back. They were covered in ulcers. I never touched them. Today was no different. I took my prayer shawl and spread in on the floor. I would kneel on it, pray, and when I went home I would throw it in the washer before using it again. I hoped it would last the length of our first term.

I started to kneel and quite firmly announced to the Lord that I had come to be "broken". With that announcement I went to my knees and started to pray. You do know that heavy smells actually can be tasted and the smell was terrible that day.

I prayed and nothing happened. After a while, as I attempted to get through, the Lord spoke to me and said," If you really wish to have your request (to be broken), then remove the prayer shawl." The thought of my flesh actually touching the floor was overwhelming. Some of the lepers walked barefoot daily over the floors, the smell of their infections entering the plank flooring. I could not do it. I would pray on. The voice came again, "Move the shawl." Finally, I moved the shawl. But the Lord was not finished with me yet.

As I knelt wondering if there was anything worthwhile in me, this fearful person, the Lord spoke again, "Get down." I stooped a bit; the Lord spoke and said again, "Go down" and I stooped lower. Finally, after the third time I tearfully asked the Lord, "I'm down...how much further?" He said,"Until there is no further down." I went down, stretched out on my face and frontal body.

I literally lay before the Lord with weeping. I would feel to turn my face and I would understand that I was to stay as I was. Something was happening. After time, later to judged about three hours, something like a dam broke inside me. Fear of disease and strangeness and filth poured from me. From the lower regions of my body to the flowing out of sounds and words from my mouth, the Lord delivered me. I would never be the same again. There would be a harvest. There would be a church and a people....There would be fulfilment of Psalm 68
:31, my call to Ethiopia. 'Princes shall come out of Egypt; Ethiopia shall soon stretch out her hands unto God.'

I arose, as a new person, and went out of the building. The guard simply looked at me. I said, 'Wolde, give me your hands.' He held them behind his back. I asked him again, and finally he extended them. I took his hands in mine and said to him, 'You will never have to hide your hands from me again' And he never did.

The foundating of the enemy's resistance was broken that day, and soon we would baptize our first Ethiopians in Jesus' name. In those beginning days of harvest, there were twenty-seven leper people who were baptized in Jesus' name and several received the Holy Ghost. Many other acts of God's mercy were done, and doors began to open to fulfill Psalm 68:31."
Posted by Pilgrim at 3:15 PM