It's Not a Problem; It's an Opportunity. 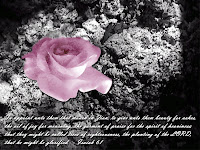 Today, while thinking about some of my closest friends, I started trying to remember how I met each of them. Most I don't even remember when exactly I met them. But a few I remember very well, because our friendships began under negative circumstances.

One of my closest friends I met while we were attending IBC together. I didn't know her at all when she asked me, while sitting in a student lounge across from me, "Do you want a new roommate?!" She was in an extremely bad roommate situation. Her and her roommate pretty much couldn't stand each other. I, on the other hand, got along fine with mine, but was wanting to find a better situation, yet not hurt my roomie's feelings. I hadn't told anyone I was feeling this way. I told the girl, "I don't know" and that I'd get back with her. Long story short, I found out through the grapevine that my roommate and her new best friend were wanting to be roomies, so, not even knowing the girl's name,while sitting across from her in the lobby again, I asked her if she still wanted a new roommate...a year and a half later we'd been roommates a year, never fought, discovered we were oddly a like in tons of ways, and still to this day we remain great friends. Her situation was very bad, and mine not so great...but a lifelong friendship came to be because of it.

Another one of my closest friends I met because I was invited by a friend of hers to stay at her house with a group of other people I didn't really know, in a town where our Bible school choral,which I was in, would be singing. I was told she was cool with me joining and so I decided to do it, though I felt a little awkward about it, considering I wasn't even sure who she was, since there were like 5 girls with the same name at our school. Well, it so happened that almost everyone ended up taking different vehicles, due to varying schedules, to drive the 3 hour drive to the city we were singing in. Somehow the girl and I ended up being the only ones who could leave at the planned time. So...we loaded up our stuff and ever since that road trip, that began with me feeling like jumping ship, we have remained great friends.

Another time, while a new freshman in Bible college, a girl who I didn't know from Adam (or rather Eve :-) said a snappy statement in response to my reply to a question an upperclassmen had asked me. I was embarrassed and hurt. Mainly hurt. I didn't understand why the girl didn't like me, when she didn't even know me.

I prayed long and hard about this, telling God I wanted to get along with everyone, and asking him to please heal the situation. Within a week the girl stopped me in the staircase and apologized. She told me she had been jealous of me and that she had liked the person she knew I liked for a while and that she was very sorry for what she did. (The upperclassman had asked who I liked. I had told him I didn't want to say. Her snappy response was "It's not like everybody doesn't know!"..Well, I hadn't known everybody, especially people I didn't know, knew, and I definitely didn't know why she was being rude about it.)

This girl was a quiet somewhat reserved person that few people got to know well during the two years I was there, but I was blessed to get to know her very well...even getting invited into her room to pet her pet bunny that no one knew about (they weren't supposed to be allowed on campus.:-) In the end she even told me that she hoped me and that person would end up together. That didn't happen. (Obviously:-P) But I think that shows just how God turned a bad situation around and made it something great!

More recently I have been blessed to develop friendships with some fabulous people whom I would never have even met probably had it not been for what turned out to be an unfavorable situation that I've had to go through. I know these new friendships are going to be long lasting and have a great effect on my life. And I know, in the end, that I will look back and say, "You know what...ever bit of it was worth it."

Today I overheard my coworker respond to another coworker regarding a "problem" they were working on, "Don't say "problem"; say "opportunity!"

Sometimes in life that's exactly how we have to look at things. Sometimes we have to think, "Wow, this is really messed up, but I bet God can do something really special with it!" If God can give beauty for ashes I believe He can take any situation and cause beauty to come forth from it! Remember we are, after all, talking about the Creater who made man from dust.

Opportunity: a favorable juncture of circumstances, a good chance for advancement or progress (Merriam-Webster Dictionary)
Posted by Pilgrim at 10:15 PM