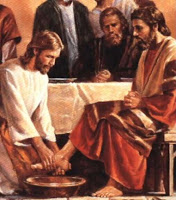 For David, after he had served his own generation by the will of God, fell on sleep, and was laid unto his fathers... ~Acts 13:36


How did David spend his life?
He SERVED his own generation BY THE WILL OF GOD.

David, the man about whom many books have been written and about whom more sermons have probably been preached than any other person in the Bible, short of Jesus Christ Himself.

David, the man who, according to 1 Samuel 13:13, was considered a man after God's own heart and who, because of this, was personally sought by God and commanded to lead Israel....spent his life dedicated to doing God's will in serving his generation. The generation he was born to serve.

Apparently David had something very right, which means there's a lot we can learn from his example.

No, this does not contradict his being a king. He was simply the best kind of leader that there is, one with a servant's heart.

2)David sought God's will and then followed it.

No, David wasn't perfect. But he was sincere. And he always knew to turn to God, to listen to Him, and to obey Him.

God knew David's heart when he first called him to lead and that is exactly why He chose him.

He chose him because He saw in him a taste of what He himself would be like when He would come as Jesus, God in flesh, the ultimate example,showing us how to truly love one another and delivering all mankind.

So...What do you think God has in store for OUR generation?!

If we choose to have a servant's heart and listen to and obey His voice, I believe we'll be humbly amazed what He will choose to do through us. I believe it will blow our minds what we are about to see God do!

Verily, verily, I say unto you, He that believeth on me, the works that I do shall he do also; and greater works than these shall he do; because I go unto my Father. And whatsoever ye shall ask in my name, that will I do, that the Father may be glorified in the Son. If ye shall ask any thing in my name, I will do it. ~John 14:12-14

....for I am going to do something in your days that you would never believe,even if someone told you. Acts 13:41