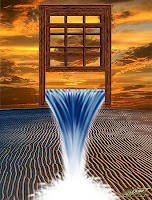 Today, while doing after school care, I saw one of the cutest & funniest things I have seen in a long time. I was watching the kids outside while they were playing on the playground. There were a few squirt bottles filled with ice water for the kids to use, with the understanding that no one's mouth could touch the bottles and therefore the water had to be squirted into their mouths. Eventually 4 or 5 of the kids got thirsty all at once and came over to the cooler to get their drinks, some waiting patiently and other's impatiently for their turn. The older kids insisted that the younger were too young to do it, and so they were helping them...or at least attempting to. Somehow, however, one of the youngest, whose only 4, not only used a bottle on his own, but he actually did it correctly.

Fast forward to a few minutes later..the older kids have the bottles and are standing no where near this child, yet I look up, and there he is...eyes closed, head tilted back, mouth as wide open as he can open it....Obviously this child is expecting some water to be poured into his mouth at any minute. The best part is he stayed in this position for a very long time...and I just stood there watching him...smiling.

I'm honestly not sure if this boy ever did get the water he was expecting...or even know why he struck that pose in the first place. Had someone told him they were going to give him water? Did he just think if he did that, that someone would automatically get the hint and give him some? I have no idea...but I do know that seeing that struck a chord in my heart.

It made me think about God and how I want to have that kind of expectancy with him...that kind of faith. The kind that when I pray about something, I might as well just consider it done.

The look of expectancy I saw on that little boy is the look I want God to see when he looks at me. I assure you, if I had had a water bottle in my hand, that boy would have gotten the water he was waiting on right that minute. How much more does God care about his own children? And how flattering would it be to him to see us with that level of expectancy...that level of faith.

...Test me in this and see if I don't open up heaven itself to you and pour out blessings beyond your wildest dreams. (Malachi 3:10 - The Message)