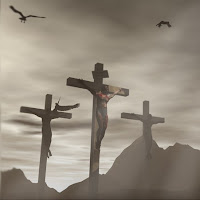 Today a long lost memory came back to my mind...one I'm sure I had buried on purpose, and will probably rebury after writing this blog, but that I believe God has brought back to me for a purpose. Maybe that purpose is you..I don't know, but I do feel to share.

A long time ago, when I was around 13 or 14, I sung in a youth choir, directed by Bro. Johnathan Dean. I absolutely loved it. We would travel some and this one particular time we were to sing somewhere in Louisiana (I forget where now) at a 2 day youth choir concert/ lock-in called Variety. Up until that point it was one of the most fun, inspiring, unique meetings to which I had ever been.

However, while there I received some bad news. Some really bad news...news,though, that could have had a much worse ending than it did. I didn't tell anyone. It was news about one of my best friends...news that had devastated me. I did my best at hiding any of the internal emotional turmoil I was feeling...until a choir (I believe from Denham Springs) got up to sing the song whose lyrics I am enclosing below. When the soloist began singing the 2nd verse I fell to the ground crying and felt God's comfort that day like I had never felt it before.

You see, this verse hit home with me. One of my closest friends had taken a bottle of pills in an attempted suicide. All kind of thoughts were running through my mind. Why would she do this?! Am I a bad friend that I didn't see this coming? Am I a bad friend that she wouldn't have talked to me about the reasons behind her attempting to do this in the first place?! This particular friend was a few years older than me, as most of my closest friends at that time were, and while she attended church faithfully, she was not living right. Being young and naive, at the time I was oblivious to the extent of some of the things she was mixed up in. (Luckily God's hand of protection was upon me. I've since learned that sometimes ignorance is bliss, but other times it can get you in trouble.) Praise God, though, that she did end up surviving. I never did actually come out and ask her why she had done it. I just tried to shower her with love and let her know that if she ever felt those feelings again to please talk to me first.

So what does all this have to do with "The Blood"? A lot. You see, there were two ways this song spoke to me that day. I questioned if my friend had looked around and seen the state she was in and began to question if she could turn back. I also questioned if my own life was right and if I had failed as a friend in someway. Had I been reaching out to her enough? Been a good & strong enough example?

That day I repented for myself and travailed for her...for God to save her life and for him to redeem her. Maybe I needed to repent. Maybe I didn't. But, at that moment I felt that if there was more I could have done, and I didn't do it, than I had fell short.

If you have "a past" or have a burden for a loved one or friend that does, remember, no matter what the situation, there's bigger sins than that beneath the blood. God's blood can cover any sin.

Also, if you or that person had a call on your life before, "God's gifts and his call are irrevocable". (Romans 11:29) Sometimes when people who have had a calling on their life come back to God, I believe they feel it is an impossibility to still fulfill their ministry. Due to the un-God-like judgements made my some Christians, there is often a barrier present, and it can be more challenging, but never impossible. God's always on your side, even when man isn't. However, I also think sometimes the person dreads facing the challenge and actually ends up running from their calling, taking the easy, but in truth miserable, way out, deciding that "that was before, God can't use me that way now." This can be either a lie from man or a lie from the devil. Either way though, it's a lie.

No matter what you've done, there's bigger sins than that beneath the blood. Accept his mercy. Accept his grace. Thank him for it. And move forward into your destiny. Our days left here on earth are very short & eternity is very long.

Bigger Sins than That

Verse 1:
So you think you made the ultimate mistake,
And Satan says, "There's just no use to pray",
Cause you have gone beyond God's grace this time",
Did you know that was Satan's favorite line?

Verse 2:
Somewhere in the darkness of the night
A teenage boy decides to take his life,
Cause he feels he's not worthy of God's love.
If he could only see beneath the blood!

Bridge:
Don't let him deceive you.
Cause Jesus will forgive you!

Also lyrics to another very good song that's by PCD:
Let the Blood Speak for Me
Posted by Pilgrim at 8:09 PM