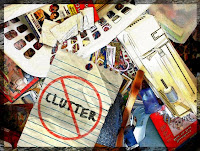 So here I am, sitting on my couch in my apartment blogging, when I should be packing. Why? Well, there's a few reasons. Number One: I hate packing. Number 2: Almost nothing is where it usually belongs...making me hate packing even more.

You see, not only am I packing for a trip, but I also am in the middle of a move. Not a drastic one..just moving down the hallway. Due to many various reasons, this move has been up in the air for about 2 months. So, for two months, I have held off putting up pictures, etc on the walls, which has made my apartment seem not quite like "home" yet. Not a big deal. However, I had thought I was finally really moving the beginning of this week. My friend who's been living in the apartment I'm moving into, has moved most of her things out of it, so I have moved some things in. Since we were expecting her furniture to be moved out, I had taken all my drawers out of my dressers, books off my bookshelves, etc expecting to move first, get reorganized, and then pack for the trip.

Which brings me to what my apartment looks like right now...at least 6 drawers laying across my bedroom, bags filled with books and various other things everywhere...and add to that that I have walked down the hall at least 10 times in the last 2 days to retrieve things I've ended up needing during the week and will need for the trip.

Clutter. I hate clutter. I am not OCD about it, but I have definitely noticed that when my personal space is cluttered it makes everything seem out of sync. To me "a place for everything and everything in its place" is a great motto. From personal experience, I've also noticed the the smaller my space, the greater extremes I go to to live by this motto. I've come to the conclusion that this is because when the clutter is staring you in the face, it's much harder to ignore than if it's in the other room and you have the option of avoiding looking at it.

For a while now I have been spending a lot of time trying to "clear the clutter" in my spiritual life. While I already had quite a few personal convictions that few people that I know even share, I realized there were still other areas I needed to examine and make decisions regarding..some of which are areas which had never even crossed my mind as needing to be examined. Sometimes you're not even sure where the clutter comes from, but whatever it is, when you realize it's there, it needs to be taken care of right away.

"For now we see through a glass, darkly.."

During this time of "decluttering" I have been asking God to help me see myself more clearly, the way He sees me. To help me understand how things gets cluttered in the first place. Who hasn't had busy moments in life, not able to get everything put up in a timely fashion, and all of a sudden looked around their house and thought, "Wow, when did this happen?!"

One's spiritual life can be the same. One way I have greatly tried to "declutter" is by cutting out a large amount of Hollywood media from my life. It's been quite a while ago when I upped the quality of what I would allow myself to watch (I haven't been perfect in this area, but have came a long ways.) However, now, I'm limiting in general the amount as well. I am instead replacing it with reading mostly non-fiction books by Christian authors...and I am learning a lot.

I also felt clutter from working a secular job and going to a secular college and having little time for ministry (or hardly for sleep at that!) So I have chosen a job for now, and will be making plans for in the future, in which I am able to be working a lot in ministry. This is my heartbeat. God made me this way. Now when my life feels cluttered, I at least know it's for the right reasons.

12And after the earthquake a fire; but the LORD was not in the fire: and after the fire a still small voice.

When I read this chapter recently a lot of new things stood out to me, some of which I may blog about later, however one I will mention now.

Many times I've heard ministers talk about these verses saying, "Be sure to listen for God's voice..You need to be silent/ focused to hear it. It's not always loud and obvious." And I understand this and agree. But I also think that the winds, and the rocks breaking, and the earthquaking, and the fire can symbolize something often overlooked.

I believe sometimes, when really great things or really bad things happen in our lives, we assume that God's hand is in it and we're too busy staring at the issue and coming to our own conclusions to listen to God's voice..still & small. In other words: I think we as Christians still sometimes let superstition sneak into our judgment/ decision making. Bad things happen to good people. And good things happen to bad people. God allows both and He has his reasons, but we must not make our decisions simply based on the force & direction of the wind or the heat of the fire.

While decluttering I am also asking God to help me to remember this. I don't want clutter to crowd my decision making. I want to always wait for and listen to His voice, no matter what the weather or circumstance. No matter what doors are closed or open. No matter what.

Friends, acquaintances, strangers:
I encourage you to look around your "room" and see what clutter you find there. Where did it come from? Now that you see it, what are you going to do about it? "A place for everything and everything in its place." If you don't know what to do with it, ask God, He knows...He may speak softly, but, if you wait, He WILL speak.
Posted by Pilgrim at 7:09 PM

Email ThisBlogThis!Share to TwitterShare to FacebookShare to Pinterest
Labels: Clearing the Clutter