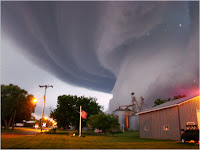 Something that I found quite humorous occurred in one of my classes today. While teaching (actually, at this time reading) in my Biology class about mammals, a new student raised his hand, said, "I know this is random but..." and asked his question. His question was about tornadoes, not animals. One of the posters on the classroom wall has a chart about where tornadoes tend to occur and at what time of year they are most likely to occur. Apparently, he was busy staring at this poster, almost too far away for him to even be able to read, while I was reading about mammals.

Some days this might annoy me. This particular day I decided to let it slide and let conversation ensue for a few minutes, mainly because I found it so amusing. You see, this student asked this question with fear in his eyes. This Senior, who is from near a very large city in the northeast, from my understanding was mixed up in the gang world. I'm pretty sure we are pretty much temporarily doubling as his "protection agency". This "gangster"...is scared of tornadoes.

His question was if they get tornadoes in Tupelo. The other students, of course, were quick to reply, in almost a bragging sense, that they do. They went on to tell random stories of buildings blown away, people killed, etc...the more they talked the more his eyes widened. It was all I could do not to start laughing. Here, the new "cool guy" on campus (per some of the students already starting to try to look like him in fashion sense, etc) was starting to freak out because he doesn't want to die in a tornado. No doubt, he has probably seen many bullets fly, but a tornado? God forbid.

I quickly assured him that everyone he had met who lived there had probably survived a tornado, if they'd lived there at least a year, so he had nothing to worry about. He, of course, referred to the one local death one of the kids had mentioned (not even sure it was true) and said, "Yes, but I don't want to be the one that dies!" I once again told him he had nothing to worry about, and quickly steered the class back on course.

It made me wonder though...how often are we like this? God brings us through one crisis after another (not sure about this? if you're still here, he's brought or is bringing you through) and yet we find ourselves worrying about every little thing. Worrying about it until it becomes way bigger than it is. And forgetting that even if it were truly a mountain, God could move it.

Recently I was reading a book that Sis. Joy Haney wrote. She spoke of how one time her and her husband were going through a very rough time in their lives and that God spoke to her one day that she must remember that, no matter the situation "God is in charge!" Ruth 3:18 also came to her mind: "Sit still, my daughter, until thou know how the matter will fall".

Don't dream up worse case scenarios. Don't throw in the towel before the last round. Remember: You have God on your side. Your job is to have faith and let Him work. Hear that? Let HIM work. Don't strategize, manipulate, or try to speed up the process. Trust. Have Faith. Live a Godly life, day in and day out.

God spoke to me last year through a very sweet and godly lady that I have desires and dreams and that God has even greater ones for me. I've came a very long way in the last few years at embracing some of the desires and dreams it appears God has for me, but I still believe even now that they are even greater than I can imagine. And I'm holding Him to it. Because that's exactly what He wants me to do.

I've seen what He's done in the past. And that gives me hope for what He will do in the future. My God has never failed. And He never will.
Posted by Pilgrim at 10:09 PM