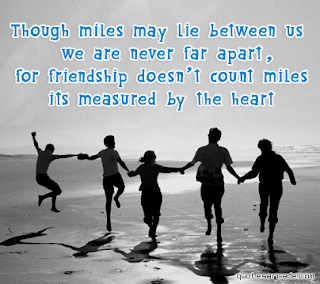 I personally fall somewhere in between the two. For one thing, I don't think it takes a new year starting out to decide to make a commitment to doing/ not doing something. Also, some years there is something I really feel to focus on...other years I'm more set on general improvement, rather than something that specifically is standing out screaming "work on me!"

This year I have decided to focus on one. This year I want to become a better giver. I want to give of myself to others like I have never gave before. As the baby of my family, this is not something that comes very naturally to me, but it is a trait I want to pursue.

In part, to fulfill this goal, I want to stay more connected. Not connected as in being on every networking site out there. But rather as in realizing who those people are that I want to make sure I stay more connected with and being the type of friend/ family member that they deserve. I'm referring to those people that years from now when I'm possibly living in Timbuktu (figuratively speaking I hope:o) I won't find myself thinking "I wonder how they're doing?" or "I wonder what ever happened to them?" But rather that I will know and will have been in enough contact with them to have rejoiced with them when they have rejoiced and have been there for them when they have gone through trying times as well.

A few years back a dear friend of mine, who knows way more people than myself and is one of the busiest people I know, decided he was going to do this. He told me he was making a list of all the people (including people like his grandma) that he knew he needed to talk to more often. In this case he was even going to assign certain days a month to call them. While I don't intend to go to this extent, I have seriously been thinking about who those people are that I should be putting on my "list".

I've been asking myself questions such as:
Who have been my closest friends in the past?
Who am I closest to now?
Who would I like to grow to know better?
Who do I feel I can learn from?
Who do I feel may be able to learn from me?

While this is my New Year's resolution, due to choosing to spend this year in a job position/ ministry that consumes a lot of my time & energy, I have already started off a little off track. Talking all day for one's job makes one less likely to want to talk once he or she goes home...and thus less likely to pick up the phone. However, I am determined. I have some awesome friends and family members who deserve my time. And, if I don't feel like talking sometimes, who cares? I can always listen. Listening's good..Listening's better anyway.

So, dear friend, if you haven't heard from me in a while, feel free to call me and remind me of this fact...I won't be offended and will be glad to hear your voice. And once you confirm to me that you fall into one of the list categories above I will be glad to call you back. (Kidding ;o)

Hope you're having a blessed New Year!
Posted by Pilgrim at 12:02 PM

Email ThisBlogThis!Share to TwitterShare to FacebookShare to Pinterest
Labels: Friendship