More than You Can Bare? 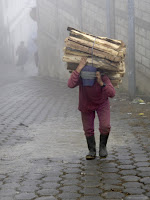 I overheard a conversation the other day, as I was walking around my neighborhood, between a teenager and his younger sibling who were doing something in their garage. The younger sibling was crying.

I smiled at this at the time...even laughed a bit. His blatant honesty and complete lack of pride was somewhat refreshing.

Then I thought about it some more. How often have we had this same kind of conversation with God?

I know I personally have been guilty of the "Please God..no more" conversation. Where you try to be patient and endure tribulation, but then you reach a point where you're like, "Ok God. That's my limit. Yep. Pretty sure. It's written in a handbook somewhere '(Insert name here)is alotted 50 1bs of hurt, grief, & dispair' and right below that '(Insert name here) cannot carry 60 lbs or more or will be destroyed.' Now, I'm not saying there is or isn't a "handbook" like this somewhere in God's filing cabinet. If so though, we are not the ones with access to it; He is. We don't know what it says. And He knows us better than we know ourselves. He did, after all, create us.

Apparently Mother Teresa had a healthy sense of humor regarding this subject:
I know God will not give me anything I can't handle. I just wish that He didn't trust me so much."

The Bible says:
"I tell you the truth, if you have faith as small as a mustard seed, you can say to this mountain, 'Move from here to there' and it will move. Nothing will be impossible for you." - Matthew 17:20 ...hear that? NOTHING.

There are many times in the Bible where even the prayer of a sincere person changed God's mind. If even God's mind can be changed, there are definately no limits in prayer.

Come boldy before God's throne with your requests, and while you are there, cast your cares at His feet. "The effectual fervent prayer of a righteous man availeth much." ~James 5:16 If something is important to you, Keep praying; but quit carry the load. Show God that you trust...truly, deeply, sincerely trust Him.

Prayer WILL always change something. It may be the situation; It may be you; It may be both. Never stop praying.

"The potency of prayer hath subdued the strength of fire; it hath bridled the rage of lions, hushed anarchy to rest, extinguished wars, appeased the elements, expelled demons, burst the chains of death, expanded the gates of heaven, assuaged diseases, repelled frauds, rescued cities from destruction, stayed the sun in its course, and arrested the progress of the thunderbolt. Prayer is an all-efficient panoply, a treasure undiminished, a mine which is never exhausted, a sky unobscured by clouds, a heaven unruffled by the storm. It is the root, the fountain, the mother of a thousand blessings." ~Saint John Chrysostom

Prayer does not equip you for greater works.
Prayer is the greater work. ~Oswald Chambers