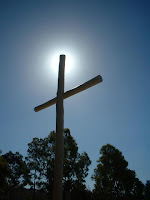 For by grace are ye saved through faith; and that not of yourselves: it is the gift of God:Not of works, lest any man should boast. Ephesians 2:8-9

An evangelist preached at my church today. He gave his testimony. Raised in an evangelist’s home, seeing all kinds of miracles while growing up, at the age of 17 he decided he didn’t believe in God anymore. For the next 20 years he was away from God; getting mixed up in some of the worst drug situations possible. Eventually he found himself facing 40 years in prison, as a plea bargain for dealing drugs. He never even began the first of those 40 years. When he turned to God and promised Him he’d do what God had called him to do a long time ago, God took control. God can, after all, do anything He wants. God took control and rescued this prodigal son from impossible circumstances; circumstances that were of the son’s own making. Through the miraculous process of God delivering him from both drugs and the extreme legal situation, many people were saved, and, no doubt, all connected learned what God’s glory is really all about…and what His grace is about as well.

It truly is amazing that God can forgive us of ANYTHING and use us again. Not “anything but…” -----Anything.

Saul killed Christians---lots of them. David had an affair then had someone killed due to the results of his own sin. Peter, who had the privilege of walking with God in the flesh, denied even knowing him, not once, but 3 times. Moses was a murder…Rahab was a harlot…The list could go on and on.

History proves that God not only forgives, but uses those whom he forgives sometimes in even greater ways then He had before. So my question is this…

Who are we as the church to stop God’s process?

Innocent or Guilty should not be the question.

That’s where the list must end my brothers and sisters.

Perhaps the next Moses, Peter, or Paul is sitting on your church bench, pastor, and you are too busy dwelling on his past to realize he has an amazing future before him…if you’ll only allow him to walk through that door.

Perhaps, saint of God, that brother or sister who you keep holding back with reminders of who they once were is the individual God has ordained to be the key to the great revival and harvest you have prayed for in your city for so long. Yet Satan has used you to plague their mind with thoughts of worthlessness; any distraction to keep them from their full potential. This is one of his greatest tactics. Do not allow him to use you as a tool.

Yes, it is amazing how a God so powerful and mighty can love us so dearly, so whole heartedly; how he can forgive so greatly and say “It is finished” before we’ve even had the chance to breath “I’m sorry.”

Who better to tell of His amazing grace than those who have benefited from it the greatest?

Still questioning if God can really use ANYBODY? How’s your faith meter? If this is something you question, it is not a matter of doubting men’s capabilities to change, but a matter of questioning God’s omnipotence.

Fact: We are clay.
Fact: He is our potter.
Fact: He can do absolutely anything He wants with the clay.

The Only Question: Is the vessel willing? (refer to the short checklist above…)

No doubt, if you’re reading this, you believe in God’s grace, and you believe it is truly amazing. Never place limits on something that has no limits.….Amazing. Grace.
….And never take for granted something none of us deserve.